This is a CBC devised and organised ride for club members. The first Cinque Ports Challenge was run in 2015. This is a revised route (clockwise rather than anticlockwise) to allow all club members to take part.

A ride linking the Cinque Ports of Kent. The Cinque Ports include Sandwich, Dover, Hythe, New Romney (old), Rye (new) and Hastings. The ride starts in Canterbury with lunch at New Romney (exact location to be confirmed). The full circular route is 200km. You can complete the Cinque Ports at Hastings after 125km, and also end at train stations after 146km (Rye) or 164km (HamStreet). This is a long distance social club ride and not a race.

CBC plan to have 3 groups leaving the Millers. “Yellow group” at 7.00am, “Orange group” at 7:30am at “Black group” at 8:00am, all heading east to Sandwich, then Dover, Hythe and arriving New Romney at around midday for lunch together. After a decent length break with hot food groups head via Rye and over the hill to Hastings. Anyone riding full route in “orange group” should expect to arrive back in Canterbury after 8pm, and “black pace” by 7:30pm 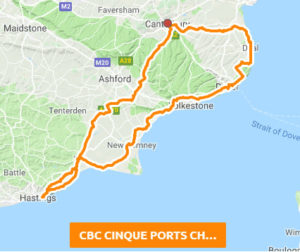