History of the Club

Early History of the Club

Canterbury Bicycle Club was formed in 1877 with 24 members.  The headquarters was at the Fleur de Lis Hotel, and the club kit was brown with a polo cap. The club subscription was 2s.6d. 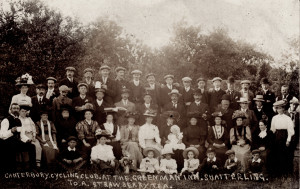 The photo above is of a Strawberry Tea at Shatterling, about 8 miles from Canterbury.

Cyclist Parade in the Cathedral (1907) 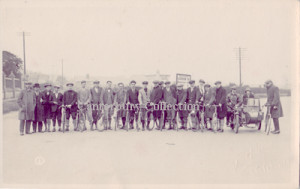 New from 1907 :
The Canterbury Cycling Club have obtained permission from the Dean for a Church parade to the Cathedral on Sunday next. Dr. Wace has arranged for seating accommodation for nearly 300 cyclists, and it is estimated that over 500 will take part in the procession, which will start from Pay’s athletic grounds, Wincheap at 1:30 and go to the Cathedral by way of Wincheap, Castle Street, St. Margaret’s Street, Parade, St. George’s Street, Lower Bridge Street, Broad Street, the Borough, Palace Street, Guildhall Street, High Street and Mercery Lane. The cycles will be stored, by permission of the Mayor under the Corn Exchange during the Divine Service. Among the various clubs who have signified their intention of being represented on the occasion are the “Star” Club (Canterbury), Dover, Chatham and Rochester, Gravesend, Whitstable, Faversham, Ashford, Folkstone, Eastry, Deal and Walmer.

Photos – supplied by permission from www.historiccanterbury.com

More Recent History of the Club

By 2014 a group of cyclists were meeting outside The Old Goods Shed on Saturday mornings for a club ride.

During 2015 the club started to grow in numbers following the introduction of a second ride at slightly slower pace. The start point moved to the Millers Pub in Canterbury, and the focus of the club was to be a friendly, welcoming club for those who wanted to ride their bikes reasonably fast, improve cycling technique and meet other cyclists.

By 2018 the club had grown hugely with over 100 members. The Saturday club ride expanded to include 3 different speeds and routes, often with multiple groups heading out on each route.

During the Covid crisis, club rides were halted and members rode individually as they were able.

Once strict lockdown ended, the club started riding in groups of 6, using an app created by Nick from MapMyTracks.

From the end of June 2021 the club has started again organising social activities, albeit restricted to 30 outside and keeping appropriate social distances.